The Kitchen on the 30th 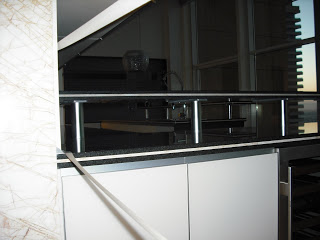 Steve chilling in the apartment 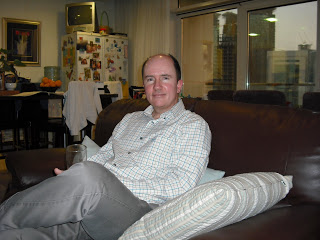 Me with the kids on my way to the wedding

Jess loving the whole setup of all the girls dressed up

The girls – Megan, Leonie, Traci, Nathalie, Me and Erin

So much to tell, so little time. It is 5am here in Qatar and I just couldn’t sleep. I am not sure if it was the unbelievably noisy and ever constant drilling 15 floors down or the thoughts of the wedding floating through my head or the thought that Jess has to go on the bus this afternoon with the reprimanded bullies, but sleep has evaded me after only getting to bed at 12:30 this morning….. boy am I gonna be tired later on today.

It has been a tough two weeks with Jess getting ill with snotty nose and runny ears and trying to sort that out and ensure that she does not get a major infection, which I am pleased to say we managed to do without antibiotics. Then I got the bug and felt awful, and now it is Steven’s turn and he got it the worst. Sean is the only healthy one amongst us, thank goodness.

So from being sick to Steve’s carcinoma issues, off he goes to the dermatologist and she checks out the guilty parties and the cream she has been making him use is working up a storm. The spots have reduced in size, which is such good news and he needs to go back in 10 days time and if all goes well, whatever is left will need to be cut out. The prospects are looking much better though with only 1 being cancerous, while the others may well just disappear…..yay to small miracles. So we wait for the histology report to arrive, and then we can proceed, but it all looks good.

Jess has also had a tough week. Our little angel who gets on with everyone has been bullied on the bus home from school. It started last term with 1 boy on the bus and some mild unneccesary exchange of badities (if that is the opposite of niceties). I sorted that out between the school secretary, bus driver and little boy in question. Their was a 2nd boy but he was protecting Jess at the time and always on her side. From then to now, the nice little boy changed sides (we think he is a bit of a sheep and perhaps was bullied into changing sides too) and the bullying commenced at the beginning of last week. Jess told me he spat at her, then he pulled her hair, tried to take her cell phone and the last stray was telling her he had a knife at home and would kill her and me…… nice little 7 year old don’t you all think. To tell a 6 yr old that is horrendous and she was in tears. What is this world coming too?? I took this up with the boys initially on the bus, the “bad child” thought I was quite funny (how sad to laugh about being a bully). Next step to send email to bus owner and head mistress (yeh, phoning would have been faster if they answered their phones). Both came back to me within the day and by the next day boys had been spoken to, had to apologise to Jess, parents contacted and letters sent out to them (as their english is not too good, think they are arabic but cannot confirm 😦 )
I then saw the headmistress the next day, as I picked Jess up from school. Boys were made an example of at assembly (which I am not sure I would have agreed to doing, it may make them angrier??) boys have to sit at back of bus, Jess at front with driver, they are not allowed to move, have to wear safety belts and if they move they will be kicked off the bus immediately. This in itself should be a warning to them, as they have already paid QR2400 for the term to be on the bus (which translated to Rands is about R6000) for 2 1/2 months and they would then have to take a taxi and the parents work at a cost of QR40 a trip (R100)…. a bit steep for transport for a day. I am hoping this will all work, apparently the “bad” boy is on his 3rd warning at school, which would mean expultion for him as well….. watch this space!

Jess also has her first loose tooth, we are very excited as she will have to have email to the tooth fairy now too 🙂 She was also apparently a wonderful Mommy Teddy Bear in her school play of Goldilocks and the 3 bears!!

Sean is practicing hard for his play and is so calm about the whole show….. I seem to have 2 actors in the making now 🙂 Not much to tell, our boy has settled in and he is happy, which makes me happy……..

Lastly, I went to another Qatari wedding last night, still find the process quite heart wrenching. I was so not sure whether the bride was happy or not too sure whether what she was doing was right. I hope she is happy, but you cannot really tell. The setting was beautiful with white flowers everywhere, made up very elegantly with lillies, roses and other flowers that I did not recognise. Loads of chocolates, savoury goodies and Arabic coffee were served inbetween meals. 4 Seasons is a beautiful hotel, overall everything was overwhelmingly sophisticated. Once again gordy mixed with elegant gowns were flowing everywhere and the ladies danced their hips away, with a good couple of westerners joining in this time. Not sure my hips would have flowed as well, so thought I would constrain myself to ensure the wedding did not fall on their backs laughing at my attempts….. there is a definite need for some lessons here if I am going to venture out onto the stage 🙂 All in all, it was fun !!!

I am so very blessed to have met and made so many lovely ladies here in Qatar. It does make life easier and the tough moments more bearable. There are still tough moments for all of us and it is nice to know there is someone who will listen and understand how you are feeling…..thanks ladies! 🙂

The kids and I ventured (Steve has been up with me before), to the 30th floor. They were very impressed. The floor is one big apartment with a bedroom in each corner of the building and living areas inbetween. The view is unbelievably beautiful and you can see the Pearl development, gulf sea and the city. We then went to the floor above, which has an entertainment area and outside jucuzi. Oh the life of the rich and famous 😛

That is my life in a nutshell to date….. 4 weeks and counting, the excitement builds!