What a strange year this has been.  While contemplating writing my annual year end letter I kept thinking how little we had actually done this year, then one of those Facebook yearly roundups kept popping up showing me everyone else’s year.  So without much enthusiasm I got it to show me mine……  And this is what I had forgotten….. 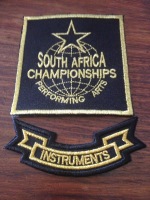 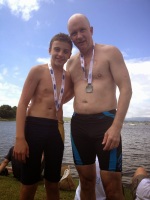 Yip, what a great year for this young man.  Being chosen as a Prefect was a highlight for Sean at the end of last year, he was once again chosen as House Captain in 2014 and Swimming Captain for the fourth term of the year. Having discovered swimming in the last term of 2013, and with a deepening passion for it, Sean has had an awesome year in the water.  The first term of school galas saw him winning a variety of medals and placing first in most of his strokes, he began Open Water competitions in February resulting in him improving his times at each event, placing 6th at the Sterkfontein Dam Open Water swim and obtaining Full Colours at the end of the year for both School Galas and Open Water swimming.  He joined Waterborn and began competing in Central Gauteng Galas in July, the squad training allowed him to concentrate fully on his chosen sport with 2 hour sessions 6 days a week and a 3rd placed ribbon at the final meet.
Music was also top of the list of achievements with Sean competing and coming third in the South African National Champs for Performing Arts in February, then receiving a Gold and Silver Certificate at the Gauteng Eisteddfod.  In February we made the decision to move him from Trinity House to Curro Aurora for the 2015 school year, on application he obtained a scholarship for his swimming, music and maths.  With the decision to move schools, we decided to change to the Aurora music school towards the later part of the year.  The Swallow15 music school was a refreshing change and it was with heavy hearts that we told them we were leaving at the end of the year, they wanted Sean to join their senior youth band who tour around Europe during the holiday season. Finally the year ended with Sean receiving the Trinity House School trophies for School Galas, Open Water Swimming and Top Maths Marks in the school, as well as an Academic Merit Certificate. And finally the best Piano player at Swallow15 School for the year after only being there for 3 months, and an invitation to play as one of their top 8 students at their final year end function.
This young boy has grown into a fine young man over the two years back in South Africa, and although leaving much behind I firmly believe he has the tenacity and drive to make whatever he wants to happen anywhere and the heart to know where he wants to go. 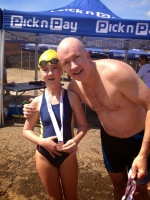 Our Jess is as social as ever and loves to get involved in everything.  She was a busy chipmunk during the year getting involved in tennis, public speaking, art, drama and was the only girl to play in the school First Team Rugby. The boys were very enthusiastic about her participation, the parents rather bewildered when they noticed the pony tail, and the coaches were rather worried she would be hurt.  All went well until she hurt her ankle and then she had to sit out for the rest of the season, much to my relief!  She participated in the school house public speaking competition and obtained a bronze certificate.
Once Sean started Open Water Swimming and Jess saw her cousins participating she decided that she would also like to try, she joined the team at school and started training but found it a bit overwhelming when swimming the Bela Bela Fun Swim. So she started stroke correction classes and joined the squad training at Virgin Active 3 months later, the training has certainly paid off and she is enthusiastic to join in again at the open water swims and galas.
Jess also started drumming classes in the first term, she participated in her first performance towards the middle of the year and did an amazing job with the band. Moving to Swallow 15 has seen Jess advancing from Level 1 to 2 within 2 months.  She loves playing the drums and I think we may just have to form a band with all the talent we have in the family. Paige on vocals, Hannah on guitar, Sean on keyboards, Michaela on violin and Jess on drums 🙂
Academically Jess has improved throughout the year, obtaining a distinction for LO in the final term of the year.  We are very proud of this little girl and know that she will get better and better at everything she puts her mind to. 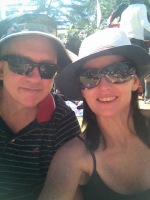 Steve turned the big FIVE O this year, with a lovely party at Lucio’s Pizzeria, surrounded by our wonderful family and friends, he settled into his half century with gusto.  We certainly celebrated a couple of milestone birthdays this year with good friend Belinda turning 40, Kaylin 21, Paige 13, and my 45th 🙂
And this coming year will see us with another teen in the house….gulp!

We continued to cycle this year but a lot less than 2013, instead we started swimming training and joined the kids at the open water swims. Initially the squishy yucky slush that comes through your toes was not particularly inviting, however we have loved the new sport and have continued swimming throughout the year. We both completed the Time keeping course and now marshal at the galas that Sean participates in. Although we entered both the 94.7 MTB and Road races, we did not participate in either but have continued to enjoy our off road cycles. Cycling became a bit more difficult with Sean’s swimming training and galas on the weekends and unfortunately I became extremely sick earlier this year with a viral infection in my thyroid which took approximately 4 months to clear but left me feeling extremely weak and tired a lot of the time. So between swimming, cycling and kids events we have had a very busy year.

We have had a few getaways during the year, going for a long weekend to Midmar for the mile swim, visiting Dad in Jeffreys Bay in July and December and spending a lovely week in the Waterburg area, were all welcome holidays.  We have also spent some wonderful time with wonderful friends this year, you all know who you are!! But I must mention my incredible, kind, loving cousin Hazel and her beautiful family – Haze, Al, Paige and Hanni – you have made our stay in SA so much happier than I think it would have been. You are an amazing family and we will miss you dearly everyday until we see you again!!

As to our move, Steve was initially head hunted for a job in Qatar but he declined it for a variety of reasons, however he started looking again when the prospects of consulting in SA became less promising. In October we decided that the opportunities back in Doha were much better than in SA and having lived there before we were very excited of the prospect of returning, the decision was made and plans began on our big move back. Steve left SA in November and we were reunited mid December, happily just before Christmas. 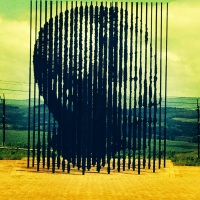 I read an article recently that questioned what exactly the definition of success was. Most people perceive it to be about having the big house and cars, expensive belongings and a job that provides you with endless money to buy endless “things”.
I always expected my life to be just that, the house, the cars, the weekends with wine in hand, friends alongside looking out over the garden and swimming pool while watching the children running around on the grass with the dogs in tow.  However success should be what you create, it should be a life filled with love, laughter, happiness and exciting adventures. It should be what your perception of success is for your life.
I certainly have been privileged to have a life so far that has been filled with a job that I loved, travel to many different countries and cultures, and the excitement of variety, with a family who laugh, love, cry and share every exciting moment with me.

And so we head into 2015 with a new adventure ahead of us, I will miss all our friends in SA with a sore but full heart, while looking forward to a year filled with the unknown and to live this life to the successes that we create.

And this is my wish to you all, to live your life with the successes that you create, to live it to the fullest and to make 2015 the best year you can make for yourselves.

With all our love
The Macs

The most expensive places in the world began to change in 2022, due to the lagging impact of the pandemic, the invasion of Ukraine, high energy prices, higher global inflation and the strong US Dollar. Xpatulator collects the prices of over 200 items, grouped into 13 cost of living baskets, in 780 global locations and […]