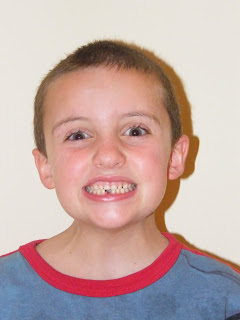 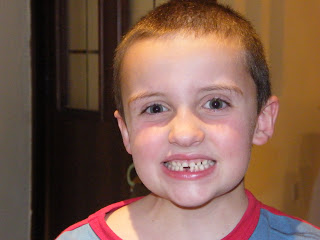 So we went for our final government beaurocratic stuff today – finger printing, straight into the computer system, just like CSI!!! Very fast very efficient, it just took us 2 1/2 hours to get there….mainly because the driver had to fetch another 10 people on the way. When we got there, we found that the gove place was basically down the road from where we live!!! can you bloody believe it…..

Best part of the day was when Sean lost his first tooth. It was really sweet, he has been letting it come out at it’s own little pace and I kept saying I would pull it out. At dinner tonight he bites into a piece of chicken and out comes his tooth. He looked at it and burst into tears. I was so excited for him that I jumped up and kissed him and he is crying he is so upset. He basically said that he felt like he had lost a bit of himself with losing the tooth. He cried a bit and then started getting excited about it and the tooth fairy and telling everyone. So we phoned everyone to let them know and he just realised that it was a big deal and that is was actually quite exciting. Sean and Jess took the tooth upstairs and put it next to his bed, then came downstairs to listen out for the fairy to arrive. And arrive she did, while on the phone to Aunty Debbie, and she left a whole 10 Riaals – this was one really rich fairy!!! He is so excited and fell asleep holding the money. how sweet is that, but our little boy is growing up and it jerks the heart to know that….another step in the process of growing up. Our little boy is growing up!!!