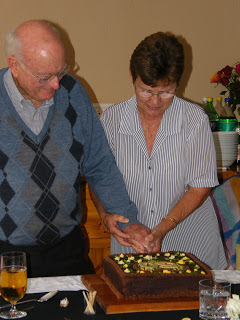 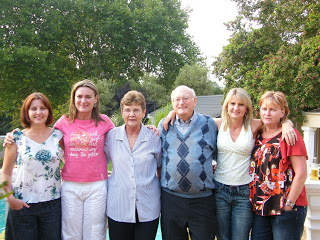 Mom and Dads’ 50th Wedding Anniversary……what a wonderful day……
We had the most awesome day. We all worked hard to get everything together from the cake to the table to the food and drinks!
When everything was ready the guests arrived and they were as excited as we were!
Guests Included:
Aunty Colleen and Uncle Eric (Pike)
Aunty Maureen and Uncle Ian (Auret)
Pam and Allan Lintott
Debbie and Dave Pedlar (Pike)
Shirley Cossavella (Pike)
Lesley and Paul Dennison (Pike)
Joanne and Harry van Tonder (Lintott)
Steven and Denise McManus (Pike)
and then all the kids…Robyn, Sean, Cameron, Jessica, Lauren, Megan and Dylan.
We all had to concoct stories on how to get the folks to Lesley’s house (where we had the party) without giving the game away, so Shirley had to let them know that they had to come up to Joburg as she could not get down to JBay, then we had to let them stay with me so that we could set up at Lesley’s house and get Mom to have her hair done at Debbie so that I could cook (at which I eventually had to tell them that I was cooking for friends that afternoon) and Lesley had to say that she was having friends for lunch and Debbie was taking them to lunch as we were all not available…….and eventually Debbie got Mom and Dad to Lesley’s house to drop something off and had to convince them to leave the car and come up to the house to see Joanne who was having lunch there. I my gosh the amount of white lies we had to tell was immense and very exhausting!!! Even to the extent that Betty (the housekeeper) who was going over to Lesley’s house to help out on Saturday and Anna could not be there….
Anyway when Mom and Dad eventually came up stairs and saw everyone they were overwhelmed, I don’t think they realised what was going on and that it was for their 50th until they had settled down. They were really over the moon at everyone who managed to make it and Aunty Maureen and Uncle Ian came from Welkom in the morning and went back in the afternoon, how special is that. Mom and Dad loved catching up on all the news with everyone and enjoyed every moment. Uncle Eric made a wonderful speech and it was so nice to have the family there. We missed Adrian, Marco and Natalie, Mom’s sisters (Hillary and Heather), their husbands and kids (Hazel and Anthony and their families), Vanessa and Eric (Pike) and Dad’s brother Malcolm and family including Alison and Sian and Alison’s mom Anne…. But love and kisses and congrats were sent by all….
They day was very special and wow 50 what a feat!